I woke up on New Year's day feeling somewhat hungover, quite full, very tired and extremely hoarse after a night of too much beer and tequila, too much barbequed "Mexican" food (I added those "" for you, Wes!), too little sleep and too much David Bowie/Nirvana/John Farnham on singstar...It was incredibly windy, the pool wasn't open and the sea was choppy and ice cold. So I did what any shamefully lazy, summer holidaying triathlete would do and decided to take an official DNS and convert my intended super sprint into a supercalifragilisticexpialidocious sprint bikini/beach tri (and slightly muddled too..)

So I changed into bikini and jandals (flipflops), covered up with a mini and headed down to the beach, with P (fellow competitor and official race photographer) in tow. 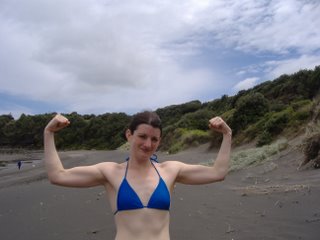 The water was cooold but I ran in baywatch styles and plunged under, swam a few strokes (maybe 20?) and then turned back. 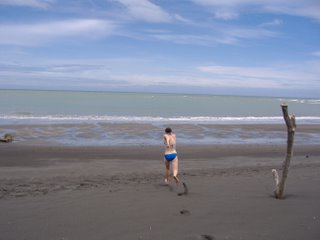 T1 was, for once very quick as all I had to do was get back to the beach and run up and down a few times, probably doing about 300/400m in total. 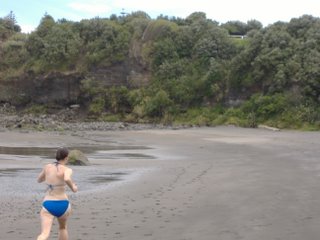 T2 was located a little further away than T1 (i.e. "home") so we trotted back, I put the jandals and mini back on, grabbed a helmet and my sister's hybrid (so I could keep the jandals on). Rode along the road and around the cul-de-sac a couple of times before I got bored and we called it a day. 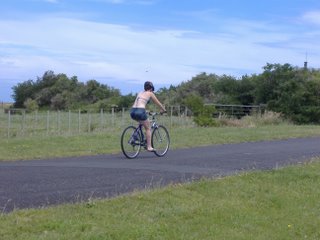 So, that was my new year's tri. A little pathetic and, to be honest, not much fun. I had hoped to get everyone involved but that didn't quite happen.

We made up for our lack of activity in the morning (sort of) by heading up Mt Taranaki in the afternoon. Mt Taranaki is one of the most beautiful mountains in NZ (in my opinion), but its peak is often covered in mist, so you always feel very lucky when you get a glimpse. 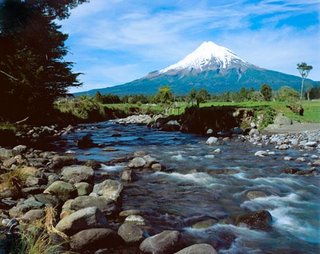 For a long time, it was known as Mt Egmont, but its Maori name was eventually reinstated. The Maori legend of Taranaki is quite well known and also kind of cute so I thought I'd share it:

Te Maunga o Taranaki (Mount Taranaki) once lived in the centre of New Zealand's North Island with other mountain gods: Tongariro, Ruapehu and Ngauruhoe. Nearby stood the lovely maid Pihanga with her cloak of deep green bush, and all the mountain gods were in love with her.

What had been a long, peaceful existence for the mountain gods was disturbed when Taranaki could no longer keep his feelings in control and dared to make advances to Pihanga. A mighty conflict between Tongariro and Taranaki ensued, which shook the foundations of the earth. The mountains belched forth their anger and darkness clouded the sky.

When peace finally came to the land, Tongariro, considerably lowered in height, stood close by Pihanga's side. Taranaki, wild with grief and anger, tore himself from his roots with a mighty wrench and left his homeland.

Weeping, he plunged recklessly towards the setting sun, gouging out the Whanganui River as he went and, upon reaching the ocean, turned north. While he slumbered overnight, the Pouakai Range thrust out a spur and trapped Taranaki in the place he now rests.

According to some versions of Maori history, one day Taranaki will return to Pihanga and so it is unwise to live along the path between the two mountains.

When covered with a veil of mist and rain, Taranaki is said to be weeping for his lost Pihanga.

We chose a route that promised to take about 60-90 minutes and led to a series of beautiful mountain pools. 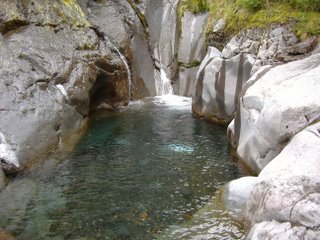 I have never been able to resist water. Such a water baby from way back (you'd think I'd be a better swimmer...) As a kid, I always seemed to find myself "just paddling" and "accidentally" falling in regardless of the water temperature and whether or not I had my swimsuit with me! On New Year's day, I proved I haven't changed much so I decided to strip down to my (fortunately quite decent) underwear to take the plunge. It was so fresh and invigorating that I coaxed P in too. Freezing but fun! 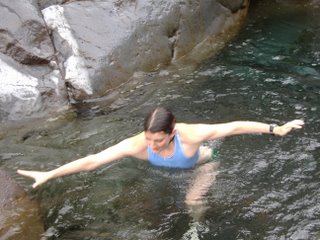 Dang! Isn't it summer down there? How can you be a triathlete with the water so damn cold?! And what's this with barbecue mexican? LOL. I've never heard of BBQ mexican and I live a lot closer to Mexico than you do. OK. Now, you've piqued my curiosity. I'm off to research BBQ Mexican dishes. That's an absolutely gorgeous pool. I don't blame you at all for taking a dip. When Dee Dee and I went to Hawai'i, specifically Kuai'i, we went on a hike. We stopped at these beautiful falls, and the guide asked me if I was going to swim in the 60 degree water. I told her I didn't travel 3000 miles to see this and not take a dip! It was magnificant. Take care!!

that is a good looking pool of water - i am not surprised you had to jump in! congrats on the adapted bikini tri - looks quite like fun!

holy biceps batman! Wish I had arms like that!

Got questions? Want to say hi?

Email me at hotpotatorunning at gmail dot com, or ask me a question!